One of the greatest pitfalls when working with VirtualBox VMs is a good understanding of how networking works. In this post, we’ll discuss the most important differences between them, and their limitations when you use VirtualBox to experiment with setting up network services on a VM.

In our system administration courses, we use VirtualBox to allow students to set up their own Linux machines without having to resort to dual booting. VirtualBox is certainly not the “best” virtualization platform, but it is supported on the three common desktop platforms and works similarly on all of them.

A VirtualBox VM can be assigned 4 network adapters from the GUI (Machine > Settings > Network), and even more from the command line. In a VirtualBox VM with EL7, the network interfaces are usually named as follows:

You can choose the type of adapter between:

The table below gives an overview of the consequences of each adapter on network routing between the VM and the rest of the world.

At first sight, the Bridged adapter appears to be the most suitable for setting up a network service in a VM, but this is not the case. Read on to find out why!

In the sections below, each adapter type is discussed in more detail, including the network settings that you can expect.

The VirtualBox NAT adapter is the default way of allowing your VM to access the Internet. However, it is normally not possible to access your VM from the host system over the network. 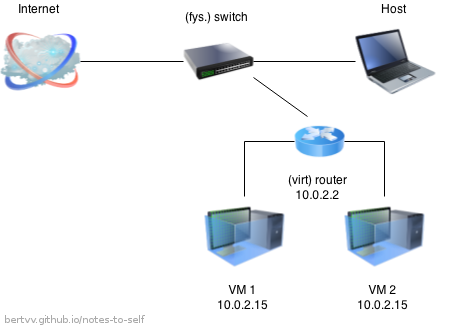 The network settings of your VM are predictable. Any VM with a NAT interface has:

You can ping the gateway and name server from the VM, but pinging 10.0.2.15 from your host system will never work.

The NAT adapter is the most reliable to give your VM Internet access. If your host system can get on the net, your VM can as well. There is one exception: when you switch your host system between a wired and a wireless adapter while the VM is running, the latter will lose its access. 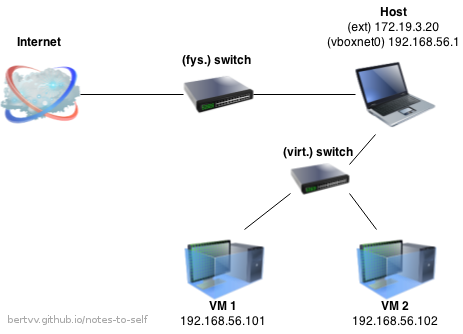 A host-only interface is named:

The first host-only network that you create, will have the following default settings:

I strongly suggest to leave the default host-only interface as is, and create new interfaces when you want to work with other IP ranges. It may be needed to shut down all VMs and restart VirtualBox for configuration changes to come into effect, especially after creating a new interface.

As mentioned before, the bridged interface gives the VM access to the physical network on which the host system is attached. Other hosts on the LAN can likewise communicate with the VM. 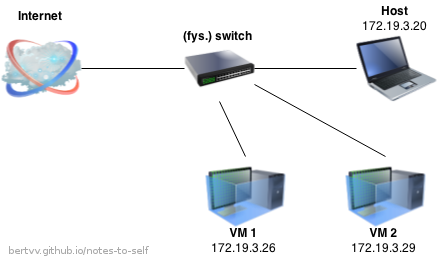 At first sight, this is the ideal setting for setting up a network service on a VM. However, there are big limitations:

If you’re setting up a network service on a VM that you at least want to access from your host system, this leaves you in a bit of a pickle:

So, no single adapter type is ideal. My recommendation then is to always give your VM two adapters.

Another advantage is that you can give your VM a static IP that remains when you export the VM in order to pass it on to someone else.

The VM is not accessible from the physical LAN, but seen from a security standpoint, that’s more of an advantage…

The NAT network and internal interfaces aren’t discussed in this article, they aren’t used as often as the other ones. Be sure to read the VirtualBox documentation if you want to delve deeper into the subject!